I know we’re a couple of weeks in but, Happy New Year! I hope that this new year finds you well.

The last few days, I’ve been reminded of the fragility of life — be it through understanding and the treatment of illness of loved ones to the loss of people we care about (both personally and ones we’ve loved from afar). Life is extremely short and the reminders are everywhere right now. 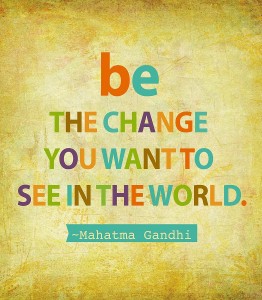 It’s actually really interesting how some people, just through their mere existence, have the ability to leave lasting impressions on all of us. This week, I got word that an old classmate passed away and immediately, a few of us joined together to think about how we could honor the great soul that he was. Our way of doing that is going to be planning a celebration of life for him accompanied with a fundraiser to an organization that we know meant a lot to him.

I also started to reflect on the passing on of people who’ve had an amazing impact on the world with their art — David Bowie and Alan Rickman. People all over the world are mourning the loss collectively by revisiting their favorite performances but also by remembering another sort of impact they had. Both men used the platforms that they had to be the change they wanted to see in the world. So in their deaths, I’d like to continue to spread the word, in case you didn’t know the lasting impressions they leave in addition to their outstanding talents.

David Bowie was a longtime supporter of Keep A Child Alive, which he joined with his wife Iman, many years ago. Keep A Child Alive is provides life-saving anti-retroviral treatment to children and their families with HIV/AIDS in Africa and the developing world. In fact, his final live performance was at the foundation’s Black Ball fundraiser in 2006 where he performed “Changes”. If Bowie had a huge impact on your life and you’re looking for a way to honor him, getting involved with Keep A Child Alive whether it be with a donation or a mention, would be a really great way to do that.

One of the final projects of Alan Rickman was using his legendary voice for a video called “This Tortoise Could Save a Life”. The video was created with the intention to go viral so that the advertising revenue generated with views could raise money for Oxford University students’ charity OneClickGiving for the refugee crisis. The funds will go to Save The Children and the Refugee Council. Give the 30 second video a watch, just doing that alone helps promote it toward going viral and helps to raise money for a cause that was really important to Alan.

By their actions, people leave lasting impressions on us, some overtly and others much more subtly. Think about the impression you’d like to leave and every day, make an effort to be the change you wish to see in the world. You’ll be sure to leave your mark if you do.